So, where do I write? I have to have a solid surface to write on, and I can spread out any pens and notes I might also need, as well as my Ipad I now use for research purposes as I write.  At home, I write at the dining table, which we don't use that often. We have our meals in the kitchen.

When I am away, like I was two weeks ago, I had to write at tables and desks. Here are the two rooms I wrote in at Dunford House.

The main meeting room, where talks were held. That's my purple jacket you see. 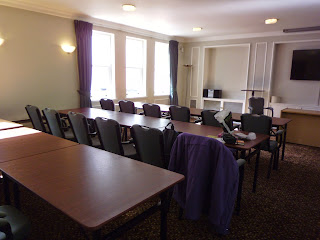 And in the library, where I would go if there was a talk on. 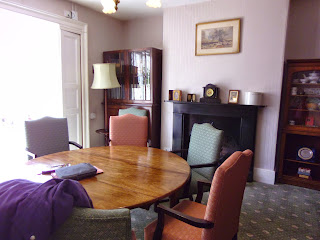 I got a lot of writing done like this, esp as I was on my own in the rooms.

So, where do you write? Do you prefer to write on hard surfaces where you can spread all your writing gear? Let me know.

SCBWI Retreat - what I learnt

I have written what I wrote, now I'm posting about what I learnt, and this was from Sally Nicholls.

The first talk she gave was about how she writes and what she came up against. Here is what I wrote from her talk:

Sally writes in scenes, but not in any order. I know I couldn't do that as a writer.

Ask questions about the main character. Who are their family. What do they do?

Be careful what message you give to children when writing about difficult times etc. Sally writes teen angst.

Personality can be defined by illness. I made a special note about this for my Asperkids series.

If you get stuck, think of the theme.

Knowing where the story ends helps the plot

For 7-9 year-olds, don't have a character by different names eg don't call the dad, Dad, Mr Jones and Bill. Call them with one name. (Made a note to do this in my Asperkids series).

As I wrote in the last post, if you get stuck 2/3 way through, then think of what your character already has. Their family, friends and hobbies. I did this with Charlie as he likes cooking, so made him more interesting by giving him a fantastic memory of recipes and their ingredients. It is related to what happens to him in the book and how he ends up.

For the second talk on the Sunday, it was more a workshop. We sat in a circle round the room. What Sally did say and I wrote down was that with plot, Act 1 is to set up the problem. Resolution cane be linked to problem. Then we had a fun hour, where Sally acted out scenes for us. She pointed to one of us and said, The story begins... and that person had to say what the character did. We had two stories: the first one ended up having ninjas and a princess in, the second turned into a mystery/thriller plot. There were a lot of laughs, but we got the idea for plot. Has to have tension in it to keep the reader going and a resolution.
Posted by Julie Day at 05:17 No comments:

SCBWI Writing Retreat - What I wrote

The weekend of Friday 8 May I went on a writing retreat at Dunford House in W Sussex, which was organised by SCBWI. It was the third or fourth time I've been there. I enjoy it there because it 's so peaceful that I get lots of writing done. Here is what I got up to over that weekend.

It started for me on the Friday evening when I had a one-to-one with author Sally Nicholls. She had read the first two chapters of Charlie and gave me her feedback. The main point she said was to make Charlie more interesting so the readers would want to read more about him and not think, so what about him. Within half an hour of this feedback, I got ideas. One of which relates to what happens to him throughout the book. It so happened that in one of Sally's workshops she said to think about what you already have for your character if you get stuck.

Saturday morning I started my fifth and final YA fantasy (my Guardian Angels series), which I am calling at the moment 'The Fire Angels'. That time I wrote 960 words. In the afternoon I began revisions on Charlie. I was planning to start a third book in my Asperkids series, but after the feedback from Sally I changed my mind. Also that afternoon, I wrote out an outline for my author service to do personally and an on-line, and sketched some angels. Sketched is the loose term for them. I put speech bubbles with them to make them resonate with my website HopewithJulie.

There were workshops by Sally and an agent, but I shall put what I learnt in another post. I didn't go to the talks by the agent and the editor.

Sunday - I wrote more of my Angel ebook, this time it was 1085 words. I also wrote more revisions to Charlie, and I wrote a short story (773 words), which I shall start expanding later this week. It is aimed at Yours.

Monday - there was time in the morning before we all said goodbye to do more writing if we wished. I did wish as I was caught up in what I was writing for my Angel ebook. So I wrote more of that. It came out to be over 600 words.

Next post will be all that I learnt from Sally.
Posted by Julie Day at 08:18 2 comments:

Well, I had put up most of the prices of my ebooks at the start of the year, mainly because I now consider myself an established ebook author and because of the new EU VAT law. Since I have done that, the results are that I have had no sales at all. None. Zilch. I am still getting downloads for 'Railway Angel' but that one is perma-free. So, I have had a rethink. Here is what I have done:

I asked a question about pricing to ALLi's regular Hangout. I asked do they price their ebooks based on how long they have been an indie author or on length. The answer I got from Joanna Penn of The Creative Penn was by length and to spread the prices. This is what I have now done. Thanks, Joanna.