How my library talk went in April

On 26 April I gave a talk at Sydenham Community Library to a group of adults about 'The 5 Steps to Publishing an Ebook'.  I was going to do a report on here, but Debbie Young of The Alliance of Independent Authors (ALLi) offered me a slot on their blog and I said yes. It went up last Saturday, and you can read it here http://www.selfpublishingadvice.org/reaching-readers-with-library-talks/#comment-236975.

As you can read, I considered it a great success. So much so, that I plan to do it again with another library whom I've yet to approach about it, and I intend doing a follow-up about what you need to know when publishing your ebook.

If you know of any library in the SE London area that might be interested in an author giving this talk, please let me know. Am keen to do this again, as I so enjoyed it.

So watch this space for more news on more talks.

If you would like to receive a newsletter from me about my ebooks, talks and more, please let me know either on here in the comments or through messaging me on Facebook.
Posted by Julie Day at 05:44 No comments:

How to make the most of a writing retreat

This is the third and final post I will be writing about the retreat I went to on 9 May. The answer to the above is not eating most of the below (our table of cakes). Yes, I did eat a fair amount of them. 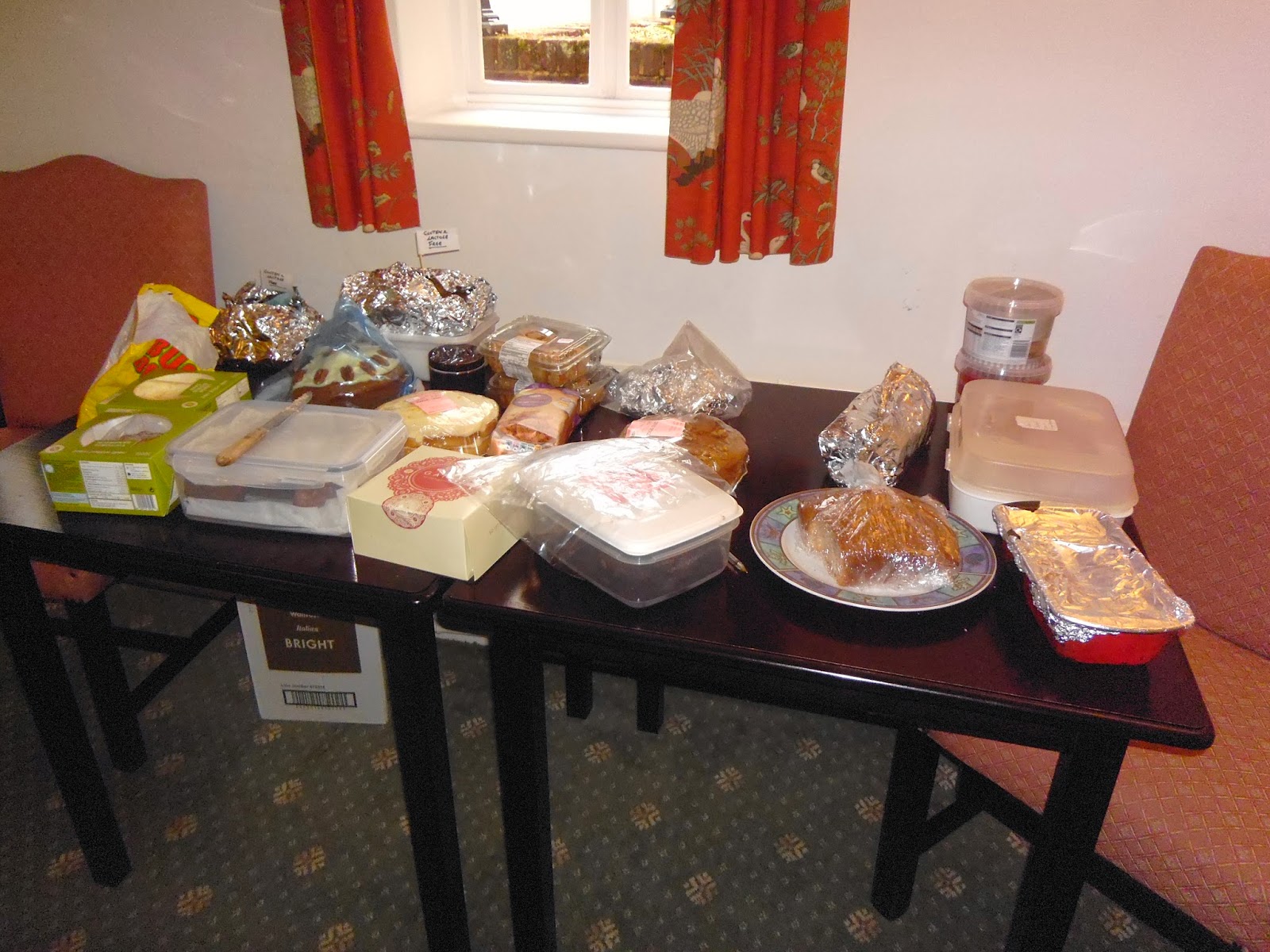 I am talking about writing. Not just what you take to the retreat to write, but how about where you are staying? Last year, I picked up a leaflet about the history of the place and its founder. I thought, this would make great articles. Perhaps I could get more info about them next time. So, this year when I got there, I asked the staff there, mentioning I was going to write articles, if they had more info I could have. They showed me a folder which had a chapter about the family. They also gave me two thick wads of info about the founder and the place. All useful fodder for planned articles. So, in the afternoon, as well as writing a bit on a couple of main projects I had with me, I researched articles in the magazines I had with me, and drafted out three travel articles. The last morning there, I finished drafting the third article, so gave back the two wads of papers to the staff.

That is what I mean when I say make the most of a writing retreat. Where you go, does it have a history? Can you write articles about the place? About the person who owned it? About the food there? Don't forget to take lots of photos when you're there. I did. I took photos of all round the house and grounds, in case they are needed if your work is accepted.

I emailed the first article with photos this morning. Have to wait now to see if it is accepted or not. Two more to type up in the meantime. Watch this space...
Posted by Julie Day at 05:45 No comments:

Retreat Part 2 - What I learnt 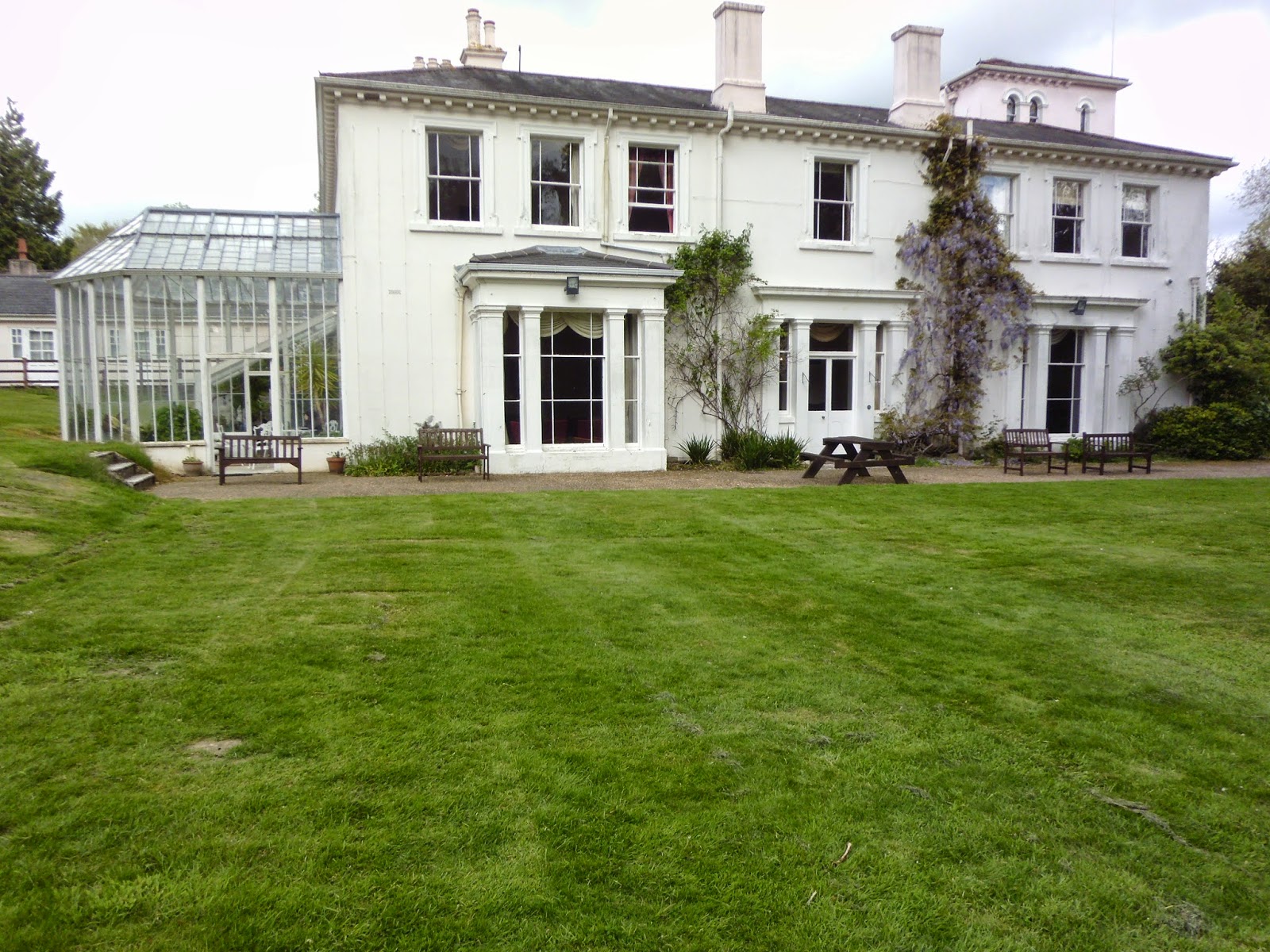 This is part two where I talk about what I learnt at the retreat. There are three different ways I learnt: about plot, about one of my characters in Charlie and about myself.

I didn't learn that much about plot, but what I did learn was that you can write a book in verse instead of prose, the traditional way. Eg Robert Paul Weston's first book is in rhyming verse. You can do it as diary format, either by journal, blog or text. This was in Elizabeth Wein's second talk during the weekend. We did exercises, and it was doing one of these where we had to write the first scene in the pov of another character that I learned a bit more about Charlie's little sister, Wendy. I learned that she cared about him, which doesn't come across in what I had already written. So I am going to add a scene where Charlie faints and sees her looking at him concerned.

So that is what I learnt about plot and one of my characters. About myself: I learnt that although I'm an Aspie, if I want to find out something from someone or connect with someone for a reason, then I will go and do it. After I had the one-to-one with the agent, who suggested I try writing to niche publishers, I remembered that a couple of the others were primary teachers. Would they know about reading matter for special needs children? I approached one of them, Zoe Boyd-Clack, whom I recalled was a primary teacher, and she kindly phoned her brother, whose partner works with special needs children to ask about what books they read, to find out which publisher the books are by. I have yet to hear, but I do hope I do. So, that is what I mean by when I want to do something, I do it.

If I hear any news about that, I will let you know. It was a great weekend. I got a lot of writing done (more on that in the next post), made contacts and got ideas on where to send my Asperkids series to.
Posted by Julie Day at 02:55 No comments:

Writer's Retreat Part 1 - What I ate

This time last week I was in Dunford Hollow, W Sussex at the Writer's Retreat. This is the first post I will be writing. Today I will be revealing what I ate there, apart from lots of cakes (dairy free). 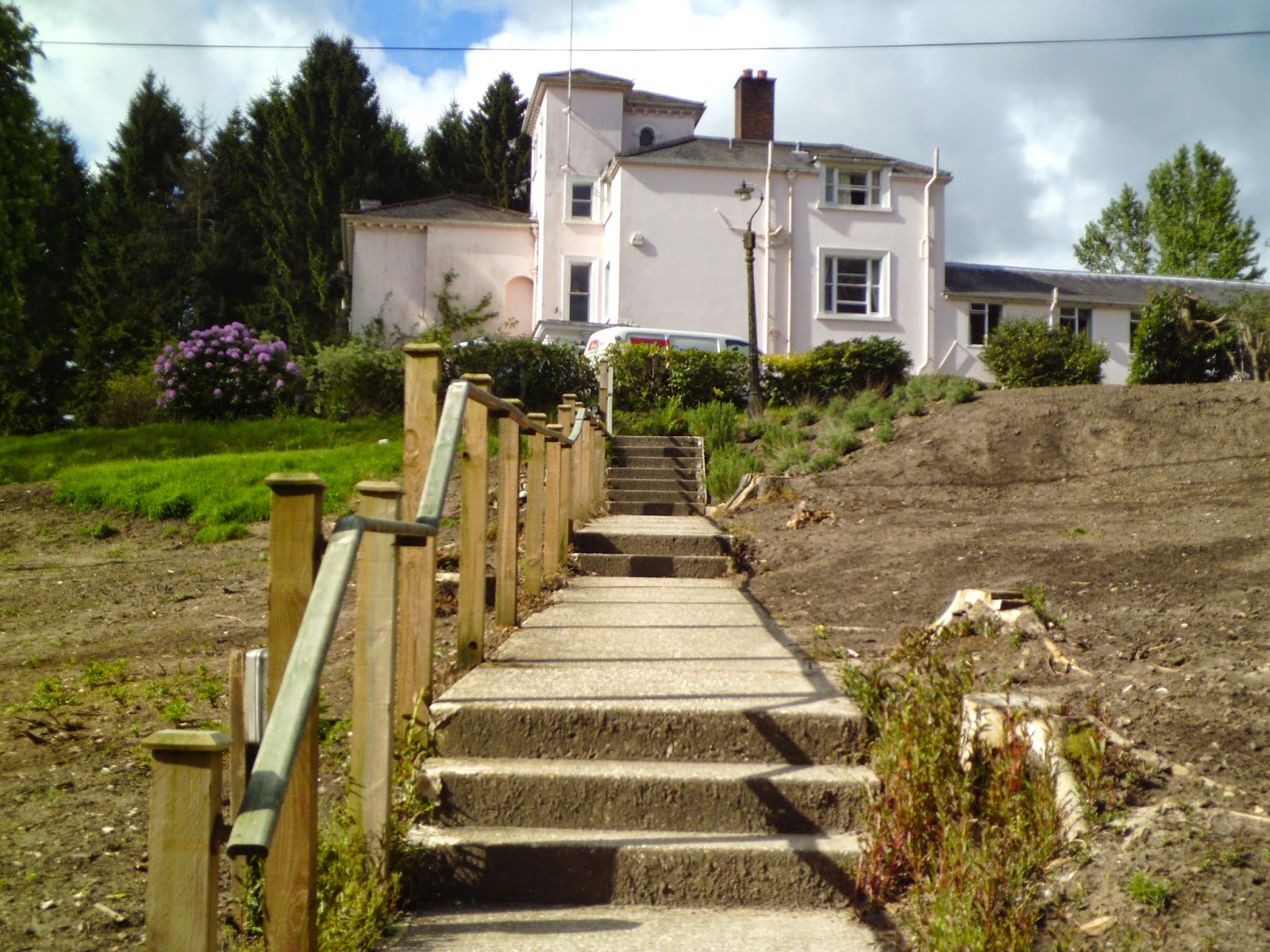 Dunford House, where I stayed.

On Friday night, for dinner I had beef bourgnion (not sure of spelling) with mashed potato and fresh veg. I don't normally like mashed potato in case there are lumps in it, but this was light and fluffy and dipped in the beef sauce tasted yummy. Someone described it as comfort food, and I agreed. It certainly was. What made it better was that the beef was locally sourced.

Saturday: I had toast for breakfast. For lunch I had home made veg soup, and this again was tasty. It tasted slightly of onions and I was OK with it. I had this with a gluten-free roll. I did what I usually do, and wasn't the only one to do so, I pulled the roll into bits and put them in the soup and then ate the soggy bits of roll. Yummy. For dinner, I had oven chicken breast with new potatoes and fresh veg, probably from nearby farms. Here is what it looked like. 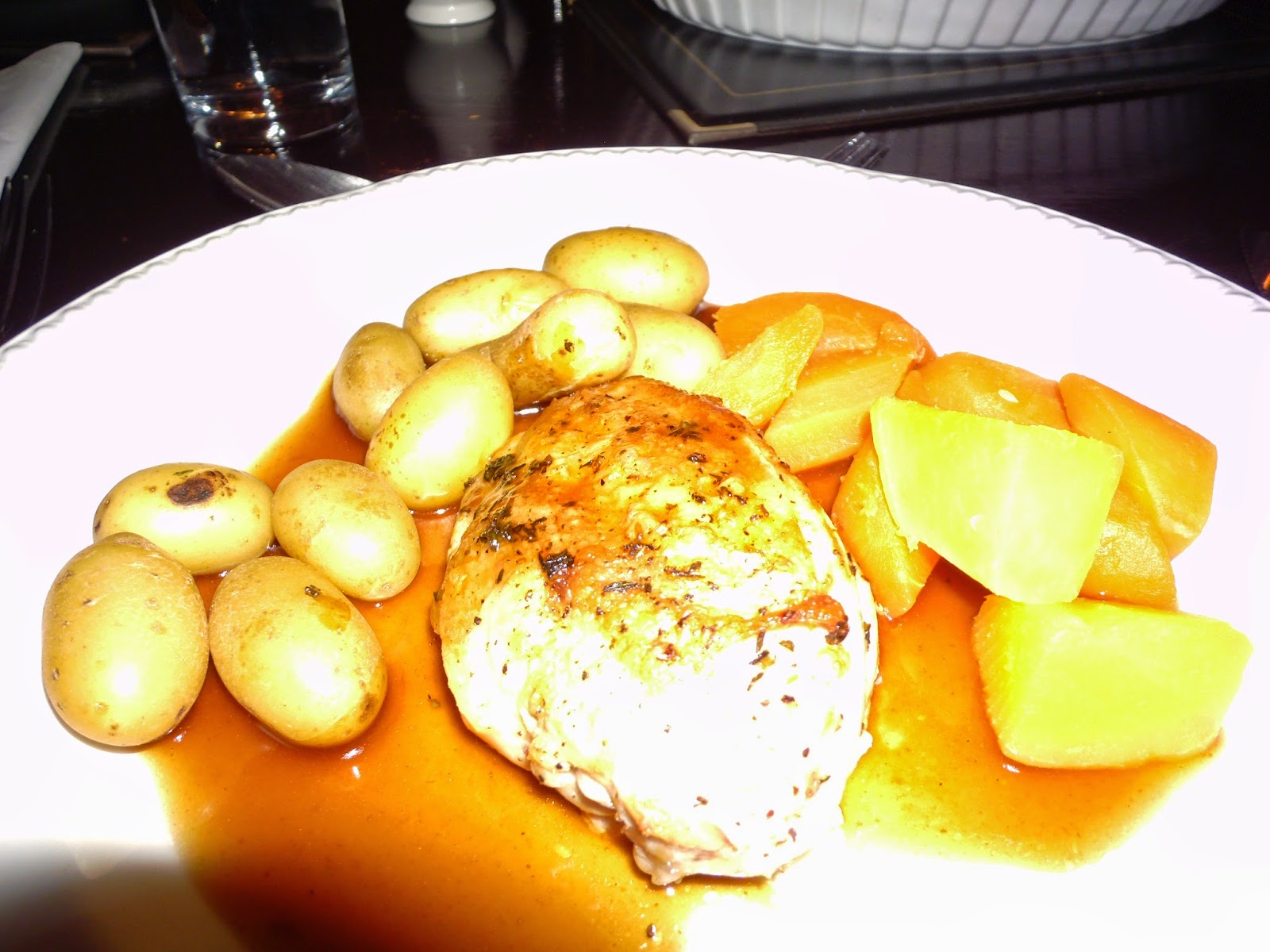 The spuds were small so I had plenty of those, as you can see. Again, it was delicious. This was followed by fruit salad, which I wasn't that keen on as it had mostly apple in which I can't eat. The same as Friday night.

Sunday: for breakfast I had dry cornflakes and some toast. Lunch was home made tomato and basil soup. The last time I had tomato soup it was in a can and was OK, but this was so different. It was fresh tomatoes whizzed up into a puree and was yummy. I had it with a gluten-free roll. Soon followed, when I went back to the house, by a cake. Dinner was chicken curry, basmati rice and salad. This was so nice that I ended up having two servings and got full up. I found space for the pudding which was fruit salad, but this time it was mainly strawberries, so I had a few of those with a couple of grapes. A good ending to that day's meals.

Monday was our last day there, just the morning. I had a hard boiled egg with toast. I haven't had an egg for years as soft ones don't agree with me anymore. So this was a treat to have, and I savoured it. I did have a couple more little cakes before I left that lunch time, and while I did my last bit of writing.

So, it was a great weekend of writing and eating lots of gorgeous dinners. They outdid themselves this year with the menus, esp for us people with food intolerances. Will be going again...

Grammer and punctuation in dialogue - a RNA talk

Yesterday I went to a RNA meeting in Holborn, where the talk was by Elizabeth Hawksley (co-author of a book called 'Getting the Point'). It was all about punctuation in dialogue. There were a few readings where punctuation was missing and it sounded awful, and a few exercises of writing in punctuation. These came from the book. I learned a couple of things which I wasn't sure about. These were:

2. When you have a quote at the end of the sentence (like the sentence in brackets above) you put the full stop after the speech mark. This has been something I've not been sure about recently, and now I know.

I found it an interesting talk. It reminded me that I don't know everything, and I needed to get out the book after all, which was in my spare wardrobe. This I did this morning, and is now with a few more reference books at the bottom of this computer desk.

So, if you're not sure about your grammar and punctuation, then buy the book.
Posted by Julie Day at 05:32 No comments: