What I am working on this week

I thought I'd post what I am working on this week. I have just had back the final edits for my mermaid story 'The Emerald Quest'. There were a couple of minor changes to work on, which I have now done. I have finalised the front and back pages, adding a link to a reader mailing list I have now set up. So, all I have to do now is to put it all together into one document, and format it into an ebook, ready to publish later this week. Oh yes, and I have to save the covers from my email account to my Word folder for the book. So, it is nearly all systems go for that book.

Meantime, I have begun working on a short story for Woman's Weekly that I started a short while ago. I want to finish that and get feedback on that. The other story I have put aside for now to think about it more.

Also, I am writing Susie's story, which I am having fun with. Am learning lots as I research the lessons that Year 6 do now, as I want to write lessons that do happen and can help Susie get more confident in the story.

If you want to be one of the first to know when I have a new ebook out or one coming out in print, then why not sign up to my newsletter at http://eepurl.com/b3zDYv. You will get a free short story called 'Billy, Literacy and News Presenters', which is the prequel to the first book in my next series called The Rainbow School.

Me, Asperger's and primary school

Following on from my last post about a workshop on group dynamics, I thought I would write about what the group I was in at primary school was like. I told the interview group in the workshop this, and I think I might include this in a memoir as part of my Asperkids series of books. Here goes:

At primary school I was very quiet. I went round with two other girls, whom I shall called J and K. One was white, the other black. The white girl I felt was the leader of the two. When I was with them, they wanted me to do things with them, their way, and it included some not nice things. Wanting to be friends with them I went along and did them. When I was on my own, I used to either be on my own and do other things such as dance or play recorder, or play with the younger children. Looking back now, I don't think they liked me doing things on my own without them, so they made me stop going do barn dancing, which I liked, and stopped me playing recorder, which again I liked and was good at. (I remember playing the theme tune to Match of the Day).

The above incidences I still remember all these years later, and I will put them in my children's series 'The Rainbow School' as things to happen to the main characters but something good will come out of it for them.

So, there you have one group dynamic I belonged to. Because of my Asperger's, I just tagged along with others, wanting to be friends with them.
Posted by Julie Day at 07:25 No comments:

I can't believe it was 2 weekends ago that I went to the retreat. One of the talks I went to by Melvin Burgess was 'Finding your inner child'. Here is what we did:

We talked about group dynamics and the different types there are. There are the ones with a leader, a star, a sidekick, a topper (who's top at everything), the one with a leader who likes to be in competition, the star who wants to be in all the groups, one that has a third wheel (that was what I was in), dropkick group with no friends by default and go together (another I belonged to).

Then we had to write down about a group you belonged to, write the characters, their appearances and group dynamics. This made me think about a group of girls I went around with at secondary school. There were 3 girls (2 Asian and 1 white) belonging to one tutor group, and a group of 2 (Asian and 1 white) in another group. The latter white girl was slightly on the edge of the group, and there was me - the invisible wheel. We had to write in the pov of the leader and what you thought they had thought about you at the time. Interesting exercise.

We had to write a couple of incidences at school.

The last exercise was a group of 3 exercise. We had to interview each other and get a story about their childhood days. One member of mine talked about moving schools so found it hard to get on until later years, the other talked about coaching younger ones. Both these stories I made a note of for my Rainbow School characters and what they could do in the books. I talked about my primary school days and how I felt about that being shy and quiet with my Asperger's, which I didn't know it was back then.

All in all, I found it a very useful and interesting workshop. So, thank you, Melvin.
Posted by Julie Day at 05:43 No comments: 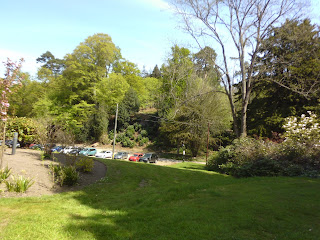 Last weekend just gone I went to a writing retreat in W Sussex. It was the annual SCBWI retreat. I always find it v productive and I did this time, as well as a lot of thinking about what I want to write for children. Over the weekend I wrote the first three chapters of the third in the Rainbow School series, which is Susie's story, and a short story for a competition and the prequel to Susie. I don't know how many words I wrote as I didn't count them, but I reckon it must be at least 3-4000. That was what I wrote. So what thinking did I do? Well, it was all about my fiction for children and the books about children with Asperger's. I mentioned what I was writing to my new friend, Anna (Hi, Anna) who I met at Waterloo station to go to the retreat and she suggested putting all this fiction under a brand. It got me thinking. Then over the weekend, I talked to a few people about what I was currently writing and planning and got loads of encouragement, and someone said that it was a good idea to help children learn about Asperger's and cope with their own diagnosis. This made me realise that what I am doing can be really good, both for children and me. I started thinking about all the other books I have planned, and thought, yes I can make the children autistic by remembering my own childhood and use those memories. As well as buying books about Asperger's for children and families and biographies (have planned to buy Chris Packham's book). So, I have decided that is what I am going to do, starting with the Rainbow School series. I will have one big name called The Asperkids books, which I will put on my website, and under that have the title of each series. I am looking forward to doing this, and maybe do talks about it, too.

The other encouragement I got was from YA author Melvin Burgess. I had a one-to-one with him and he had read the first two chapters of Billy, and he said he really liked Billy, felt for him and enjoyed the story. He gave me a suggestion to put at the end of the story which I will do.

Change in my writing goals

If you have been reading my recent FB posts, you will see that my writing goals have changed over the last week. One of my new year goals was to write pocket novels for My Weekly, and I have now decided that this isn't what I really want to do and what I can't really write, after all. Here is why:

Earlier this year I finished the pocket novel I had been writing and had sent a partial of to the RNA's New writing scheme for feedback. I sent it to my editor, who I know is v honest and truthful about my writing. It came back last week via email with lots of comments in the email itself. I've not read the actual edits yet. What the email said was that the ms was too flimsy and not good enough for a pocket novel, which I knew deep down myself. I emailed my editor to ask this of her, and she replied, yes, it's not good enough, but don't waste it. It made me realise that I can't write proper romance, only magical realism with a hint of romance. So, that writing goal has been deleted from my plans. I am going to continue writing the Geraldine's Gems and Singleton stories which are all magical realism with a touch of romance in, as I feel I can write those and I enjoy writing them. Just writing those last few words has also made me realise that I didn't really enjoy writing the romantic part of the pocket novel but I did enjoy writing the mystery bit.

I am continuing writing short stories for womags as I enjoy writing those. My main writing goal now is to be known as an indie children's author, esp about hope and Asperger's.

So, that is the change in my writing goals. The mss I still have upstairs in the cupboards I am keeping and will read them at a later time to see if they can be either made into children's books or serials for womags. So, not wasted.

My motto now is: write what you enjoy doing and what you know you can do.
Posted by Julie Day at 05:40 No comments: